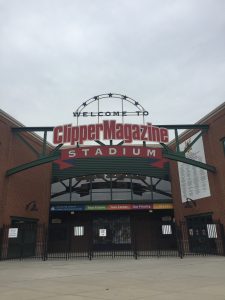 The Lancaster Barnstormers and the City of Lancaster team up in a doubleheader for sustainability.

While fans in Lancaster county await opening pitch for the 2018 season, the Lancaster Barnstormers’ staff have their hands full away from the diamond and out in the parking lot.

In effort to achieve better sustainability, the rear parking lot to Clipper Magazine Stadium is currently under construction, as two new drainage basins are being installed to prevent storm water from going into the sewer water in Lancaster city. Both sewer and storm water were previously going into the same location, but they will be going into separate basins following the conclusion of the construction.

Lancaster’s Storm Water Program Manager, Ruth Hocker and the Lancaster Barnstormers’ Director of Stadium Operations, Andrew Wurst are spearheading the initiative to continue the sustainability efforts of both the Barnstormers organization and the city and community of Lancaster.

“We take pride in where we work and what we do with this facility,” Wurst said. “We make sure to finish our tasks and hold them up to the standards that we set for ourselves. We know with sustainability how critical this is for our community. We are obligated to do this and we try to go above and beyond in that regard and take that approach every day.”

Wurst has been with the Barnstormers for five years. He knows that the budget of a minor league team isn’t what you will see for teams in Major League Baseball, but he believes in being active in sustainability and efficiency to make Clipper Magazine Stadium one of the most sustainable and energy efficient ballparks in all of Minor League Baseball.

“The minor leagues are the minor leagues. We’re not the big guys. We realize that, but we also realize the importance of running efficiently and the green initiatives that are out there and we’re always looking at ways to get involved in that kind of stuff.”

For projects like the drainage basin installations going on now at the park, a lot of factors come into play. For Wurst and his operations staff, time is among the top of that list. The Lancaster Barnstormers play in an independent, AA professional baseball league, The regular season is 140 games, with 70 coming at Clipper Magazine Stadium. Due to this, the Barnstormers’ timetable for big projects isn’t an ideal situation at times. For this initiative, Wurst made sure that was addressed. Construction began on site November 20th, with the goal of it being done by April 25h; just in time for the Barnstormers first home game of the new season on May 4th.

“That was really the only stipulation I had.” Said Wurst in regards to the construction timetable. “I was very adamant about the fact that we had to be wrapped up and we had to be back at 100% parking capacity by opening night.”

That being said, Wurst couldn’t be happier to know they will be able to accomplish that.

“We work well with the city on a lot of different events. We pride ourselves on giving back to the community, and these sustainability projects are a big part of that. We’re a part of Lancaster County. This is our county and this is our city. We’re proud of that.”

Drainage Basins
Lancaster city’s Storm Water Management Program is teaming up with the Barnstormers to create infiltration beds for the drainage basins to go, which will result in the water percolating back into the Earth, reducing the organization’s footprint on the water system. This will also help vegetation begin to grow outside the stadium. In doing this, the storm water drained out of the parking lot and stadium will now go back into the Earth instead of into the sewage system, making this good use of water efficiency. After just a couple of weeks, the construction on one of the drainage basins is already nearing completion. 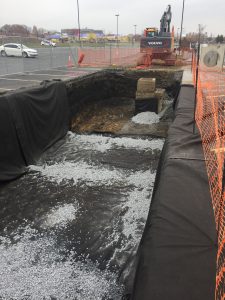 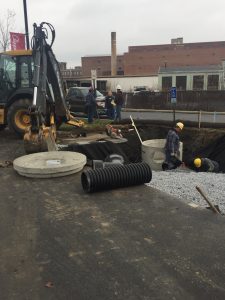 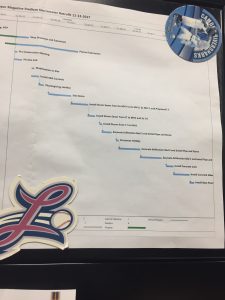 Graph illustrating the progress and estimated time lapse for the duration of the basin installations. Photo take by Andrew Mossbrooks 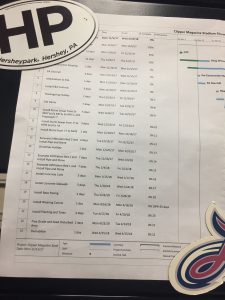 Outline of the work being done at Clipper Magazine Stadium. Photo taken by Andrew Mossbrooks

A Project in the Making with More to come

While the project for drainage basins at the ballpark was officially given the green light this past November, the idea was presented quite some time ago. When talking with Wurst, he said it was sometime in 2014 that the Barnstormers were approached about the idea. The reason it took so long was because the project is entirely funded through the government. It was a “no brainer” on the Barnstormers’ end because they understood the importance of sustainability and knew the water situation wasn’t the best. They have also installed an irrigation system and what Wurst calls a “rain bird”. This rain bird actually can track the grass and dryness of the field to know if the grass will need watered before a game. So much water is used in other ballparks as part of an educated guess for when the field needs it, but the Lancaster Barnstormers  are ensuring that water will only be used when needed and not in a wasteful manner. Andrew and his staff also plan on going further with sustainability and energy efforts following the coming season, that will include LED lighting and no longer using florescent lights that are not good for the environment. 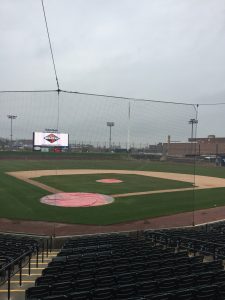 In just a few months, the Barnstormers will open the gates once more for their most sustainable season yet in downtown Lancaster.
Photo taken by Andrew Mossbrooks

Lancaster city is always trying to create a more sustainable environment for their community. It’s why they were recognized in 2014 with the first “Sustainable Pennsylvania Community” certification awarded by the Pennsylvania Municipal League. The award was given to Lancaster because of the ongoing efforts made by the city to reduce the use of inefficient energy, improve land use, reduce waste and more. This came after Lancaster was given gold status under the program that tracks 131 different requirements and items that define what a sustainable community is. They were the first Pennsylvania Municipality to receive this award and in the three years since, Lancaster has continued to push these efforts.

The ongoing changes at Clipper Magazine Stadium are a result of the already Eco friendly storm  water in Lancaster. The city’s sewer system is separated into two different areas: storm sewer lines and independent sanitary sewer. The setup helps during times where there is rainfall, because the storm water will runoff into the Conestoga River or Little Conestoga Creek. Water gets back to the Lancaster water treatment plant, where they can collect samples and make sure the recycled water is free of debris, chemicals, dirt and other substances that should not be in drinking water. The storm water program is also invested in helping limit the urban water runoff from the city, which is where Lancaster’s infiltration beds and basins can make a difference.

Photo credits to
cityoflancasterpa.com
This image shows statistics for urban runoff and how infiltration beds can help prevent water waste in the city.