Lancaster County is saying no to certain recyclables. 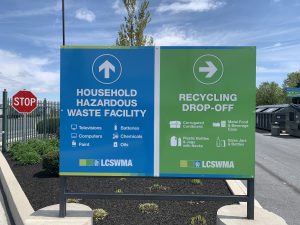 The Lancaster County Solid Waste Management Authority is cracking down on what items can and can not be accepted as recyclables. The items referred to as the Big 4 include corrugated cardboard, plastic bottles and jugs with a neck, metal food and beverage cans and glass bottles and jars (LCSWMA). The Big 4 plan went into effect due to the rising contamination levels in US, caused by unwanted materials placed in recycling bins. Since they can now produce the materials themselves, China decided to stop buying and importing our material. In response, Lancaster has chosen to go back to basics (City of Lancaster, 2019).

Recycling was introduced in the 1930’s and 40’s during economic depressions. Goods were scarce and had to recycled and reused in order for people to survive. Conservationism was slowly forgotten about after the postwar economic boom. It wasn’t until the first Earth Day in 1970 that it became a mainstream idea again (Grabianowski, 2019). Earth Day’s goal is to go green and help protect the earth. Since the first Earth day celebration, the motivation to go green and recycle has grown so much.

As time goes on, and society evolves, news ways of waste management are encouraged. To reduce the amount of waste created, the three R’s were put in place. Reduce, reuse and recycle is the three step guide to helping reduce the carbon footprint. As environmentalists fight for a greener economy, new steps are added to the list. What was once simply known as the three R’s or recycling, reduce, reuse, and recycle has now received a fancy upgrade. According to Environmentalist, and Certified Health Coach, Joanna Garcia, the R’s of recycling are now as follows: refuse, reduce, reuse, repurpose, recycle. The upgrade added two steps to the mix to help reduce trash and lower the carbon footprint.

The refuse step gives shoppers the power to say no to certain products. Straying away from purchasing products that contain unnecessary packaging, or even using plastic bags can cut down on the amount of plastic that ends up in our environment post trash night. The repurpose step is made useful for items left over such as newspaper and egg cartons. Repurposing the items for various other projects not only helps the environment, but also saves money.

Before the Big 4 plan, the list of accepted recyclable items used to include paper such as magazines and newspapers. Items that should never be recycled include, loose plastics bags, foam containers such as egg cartons and take out containers, and plastic utensils. According to LCSWMA, believe it or not, not everything with a recycle label on it can be recycled. “When in doubt, throw it out” (LCSWMA). The Big 4 cuts downs on these items to reduce the amount of trash being mixed in with recycled materials. 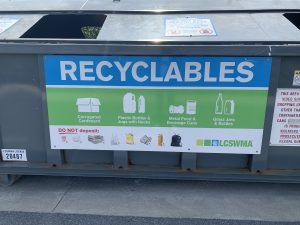 With the new plan in place, the LCSWMA has designated bins for each of the four categories. Each bin is labeled for each category and has two sides for easy access. There is a pathway marked out for drivers to help ease the process as well. At the bottom of the label, there is a list of items that should not be placed in the bin. These items include those that were cut out by the Big 4 plan, such as:

If the listed items can no longer be of use and are in need of recycling, they can be taken to the City of Lancaster’s Recycling Drop-Off Center at 850 New Holland Avenue. The LCSWMA is located at 1299 Harrisburg Pike, Lancaster, PA 17603. 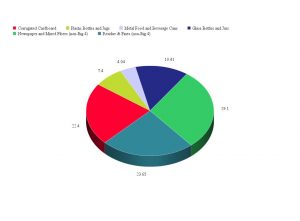 This chart represents the monthly system-wide averages of recycled products. 5 counties are included in this chart. With Lancaster being the only one out of the 5 to participate in the Big 4, a large amount of mixed paper is still calculated (LCSWMA). 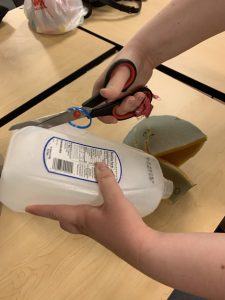 Repurposing materials is a great way to rid the house of unwanted items while also putting them to good use. Instead of recycling empty cartons or old newspaper, use them to make arts and crafts. For example, the sides of empty milk jugs can be used to create a base for a puppet mouth by cutting out an oval shape and folding it in half. Cut the newspaper into strips, dip it in glue, and papier-mâché it onto a balloon. This can be used to create a structure for the head. These techniques were taught in Victor Capeece’s Puppetry course at Millersville University.

It Starts With You

Packaging, while pretty to you, can turn out to be very ugly to the environment. When purchasing products, the extra packaging may seem like a good idea at first. In the long run, it is the extra plastic that is damaging our environment. We as society have the power to say no to certain products. Going green is not just about recycling, or picking up garbage form the side of the street. Refusing to purchase certain products leads to reduced production which leads less plastic in the trash. The right steps in action, can have a domino effect that is very beneficial to our surroundings. It all starts with you.

Meslissa Showalter is an assistant manager at the Community Aid Thrift Store & Donation Center in Lancaster. Thrift shopping has become more and more popular in the past few years. It has been popularized for the many benefits it has. For example, thrifting reduces the amount of trash and landfill waste. It also allows shoppers to find treasure items at a low cost. When on the hunt for a good bargain, finally finding that special item makes you feel accomplished. For Showalter, managing such a unique type of store is interesting. Everyday is an adventure because you never know what is going to come through the door.

Dr. John Wallace is an Entomology and Ecology professor at Millerville University. Ecology specifically, focuses on the relations of between different organisms and their physical surroundings. According to Wallace, 30% of all plastic since 1950 is still in use today. In order to stop exhausting our places to store trash, we need to reduce what we are making with renewable resources. The demand for new waste can be reduced by reusing what we do make. Recycling what we’ve previously made by finding alternative resources also slows production. Recycling stretches beyond campus. It benefits the world that we inherited from our parents and will one day be passed down to our children.

Ecoscraps, “A Simple List of What Can and Cannot Be Recycled.” Ecoscraps.The Hawthorne Gardening Company, n.d. Web. 23 Apr. 2019.