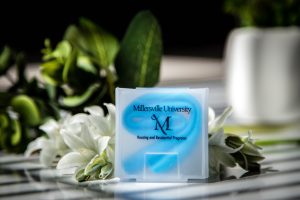 The Millersville University housing staff takes their part in being role models for others by encouraging sustainability. RA Iyla Stebbins, a Sophomore majoring in Speech Communication with an option in theatre, recognized the problem that plastic straws can cause. She saw a post on social media about the company called Final Straw, the first company to create reusable, collapsable straws. Since plastic straws are not recyclable, they end up harming wildlife and causes many other environmental issues. Iyla jumped on the opportunity when she saw it. The problem was that she is only one person, and while she can make a difference she wanted to spread the word. 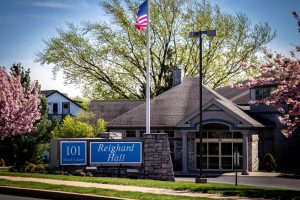 Emily Suhr, a Sophomore at Millersville studying Communications with an option in Public Relations, was introduced to the straws by Iyla. She liked the environmental impact she could make using the straw, as well as the fashion statement and personalization feature she got when she could pick which color she wanted. She thought it was great that the company is funded through Kickstarter, so she was supporting a small business for a good cause. Emily has the perspective that if change is going to happen it will start small, and encourages everyone to try to use no straws, buy a cheaper metal straw, or shop at places like Starbucks that have designed straw-less lids. 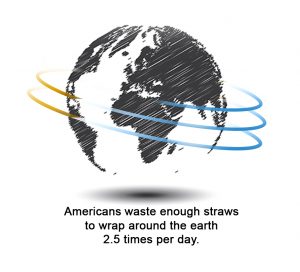 Even though Iyla was able to motivate one friend, she wanted to do more. She saw a magazine called 4imprint that was sitting at the desk one day while she was working. In it, she saw an advertisement for a rubber, reusable straw. The company specializes in college marketing and supplies, and allows one to buy products in bulk and brand the supplies with a school or company logo. She asked her boss, Matt, if she could use her program money to invest in a lot of reusable straws to give to residents to help them join the movement. 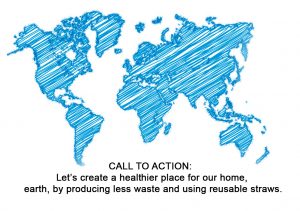 RAD Matt has worked as a professional staff member since 2011, and has worked as the Shenks and Reighard RAD at Millersville since 2013. Before Iyla asked him about her idea, he remembers overhearing lots of students complain about the campus paper straws. Matt researched Iyla’s idea, and got the company to send him a sample. He liked the fact that it was silicon based, which means it would not taste metallic like a lot of other reusable straws that have been made. It was small and easy to clean, which was important because residents usually do not have kitchen sets. The straw was flexible, yet sturdy, and it fit within a reasonable price range. A week later, Matt purchased the straws in bulk and starting handing them out, only to see that this idea would create more of an impact than he could have imagined. 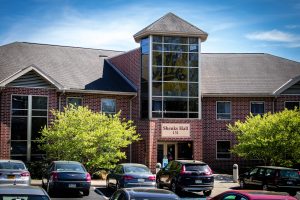 Matt introduced the reusable straw to:

He believes that being able to show someone, have them physically hold it and use it is a much more effective way to get people to get the word out and make a change instead of just telling them. One student who has trouble eating and drinking found it easier to drink from this straw and benefited from this environmental effort. It is the small steps that make a difference. Iyla’s idea spread into something bigger than herself. As role models, RA Iyla and RAD Matt continue to make change and encourage students to join the movement and work towards saving our environment. 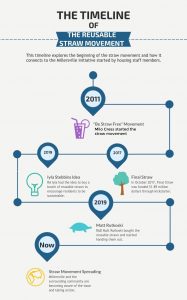 Millersville University has committed itself to achieve carbon neutrality by 2040. The Climate Action Plan was devised in 2016. Its programs have since reduced the campus’ greenhouse gas emissions by 5 percent. The Lombardo Welcome Center is a zero energy building the University built as a result of the initiative. The campus community has taken on the responsibility by engaging the students through coursework, constructing energy management systems, partnering with Commuter Services of Pennsylvania, and hosting events such as “Ville Unplugged.” Millersville recognizes its role in society to reduce the negative effects of climate change and plans to work on sustainability efforts for the present and the long-term goals.

Franklin and Marshall College takes part in the initiative towards global sustainability by creating a five phase Sustainability Master Plan. There are nine areas of focus, including education and outreach, campus landscape, and the food system. One of the goals F&M hopes to achieve by 2030 is to reduce carbon emissions by 100% below the 2007 baseline. Efforts will maximize the use of spaces already built with the idea that the most environmentally impactful building is the one you never build. The plan is currently in phase two, which funds over $2 million towards efforts. This plan will positively impact the F&M community as well as the Lancaster region.

Final Straw is a company that started on Kickstarter and has helped kick start the reusable straw movement. With the mission to end the waste and contamination of single-use plastic straws, Final Straw has been engineered to be easy to clean, carry around, and be stylish. Because plastic straws are not recyclable, they usually end up harming the animals that call the ocean their home. Americans contribute to the straw problem enough to wrap the world in straws 2 ½ times! Final Straw hopes to raise awareness of this issue and contribute to saving our earth, the place we call home.

4imprint awards schools, non-profit organizations, and small businesses through the one by one program in 2018. Money funds products to help market different organizations and promote initiatives. Among those that received the award was The Distress Bandanna Teen Driver Safety Initiative, Inc., which encourages safe driving among teenagers. This organization received car ice scrapers to hand out and raise awareness about their mission. The program started in 2006 and has since awarded 6,000 organizations. Kevin Lyons-Tarr, 4imprint CEO, says it is very nice to see the ways in which 4imprint can help make a difference in communities and those in need.