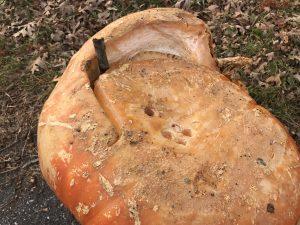 Organic Alternative: Pesticides are sprayed onto crops to prevent rotting and decomposition caused by insects and other pests. People aren’t usually opposed to pesticides since they protect crops, but some vegans oppose the way current pesticides are produced. One alternative proposed is an all-organic pesticide but even those aren’t perfect. The process to get a pesticide approved is a long one that goes through the U.S. Department of Agriculture. Even organic substances that would be effective as a pesticide could be harmful to humans. One possible method that has been effective on a smaller scale is to spray pheromones onto the crops to repel the insect. This method, while effective, concerns the general public due to the unknown elements contained in the pheromones.Photo by Kyle Brady

Farmers all over Pennsylvania are looking for safer alternatives in place of harmful pesticides.

In March of 2017, a 10-year old Lancaster boy was celebrating his birthday at his favorite restaurant when he and his little sister ordered apple juice. After taking just one sip, both children started vomiting blood and were immediately rushed to the hospital. It was found that the apple juice they had drank was purchased locally and contained large amounts of methanol. While the source was never confirmed, there is suspicion that the menthol came from the pesticides that the apples were sprayed with.

As the vegan lifestyle has become more prominent in the United States, there has been an increase of attention on pesticides and their use in farming. Pesticides have been used for decades to keep crops healthy for longer allowing for the harvesting, transportation, storage and eventually, consumption.

The argument for pesticides is that it aides all of the previous steps, but some people think that the pesticides are harmful. Not only is their belief that pesticides can cause harm to humans if consumed excessively over an extended period of time, but that it is also harmful to the environment.

A panel was held in late October where farmers from all across Lancaster County were in attendance to discuss their thoughts on the use of pesticides. While the issue of the long-term health of consumers was not a pressing subject, the farmers did express their concern of the environmental and financial burdens that pesticides present. 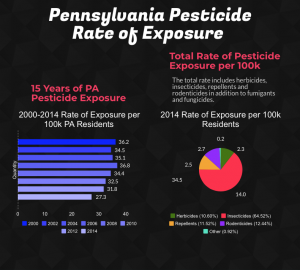 Exposure to Pesticides: Pesticides main purpose is to harm or kill anything living species that tries to consume the plant before being harvested. Farmers will spray these pesticides directly onto the crops to help protect them during their growth. Current pesticides are fairly effective in protecting crops, but they also pose a threat to human if exposed for too long. According to the World Health Organization, there are around 3 million cases of pesticide poisoning reported annually, with over 200,000 of those resulting in death. It is estimated that 97 percent of human exposure to pesticides comes through skin contact which can result in irritation and rashes. People who experience this exposure should seek medical assistance immediately. Graphic  by Kyle Brady.

The term “pesticide” is a blanket-term that encompasses other repellents such as insecticides, herbicides and rodenticides. In this meeting, local farmers agreed that insecticides were not worth the harm they were causing, claiming that there is no guaranteed way to prevent all insects from targeting crops. Also, insecticides can kill those insects whose pollination is vital to the surrounding environment. 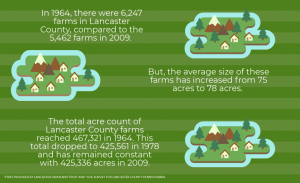 Lancaster Farmlands by the Numbers: Both the total number of farms, and the total acres of farmland have decreased in Lancaster County since 1964. This could be related to the modernization of architecture and the gentrification of areas in Lancaster County. However, the average size of Lancaster farms has increased. Farmers who have been able to stay in business have purchased more farmland to expand their crops and increase their profits. Another reason for the consistency of Lancaster farming comes from the heavy Amish influence the area has. A primary source of their income is based on their crops, so they do not sell their land and continue to expand their property.  Graphic by Kyle Brady.

Alternative solutions include experimenting with fewer repellents, using high tunnels to protect crops and even something as simple as planting crops in mulch. This method makes it hard for bugs to crawl through and get to the crops. 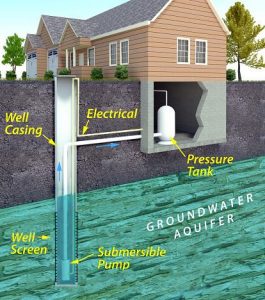 Private Water Wells: In Pennsylvania, it is very common for households to operate off of private water wells. These are buried underground and contain water that is used by the house. There are three different types of wells; dug, driven and drilled. Each are named for the method of which they are put into the ground and for how deep they are placed. They all serve the same purpose, but the deeper the well is placed, the less likely it is to become contaminated. Rainwater can collect bacteria and chemicals so wells should be placed away from where rainwater will flow. (Graphic courtesy of USEPA https://www.epa.gov/privatewells/about-private-water-wells) 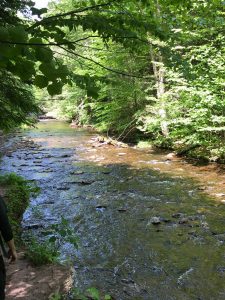 Pesticide run-off from crops can find its way into creeks and streams, contaminating the water. Photo by Kyle Brady.

Lancaster county soils in particular are heavy in metals such as lead, arsenic and mercury. In addition to the run-off from pesticides, this makes Lancaster more susceptible to contaminated water wells. This further increases the importance for local farmers to take the necessary precautions.

In Pennsylvania, it is very common for households to operate off of private water wells. These are buried underground and contain water that is used by the house. There are three different types of wells; dug, driven and drilled. Each are named for the method of which they are put into the ground and for how deep they are placed. They all serve the same purpose, but the deeper the well is placed, the less likely it is to become contaminated. Rainwater can collect bacteria and chemicals so wells should be placed away from where this rainwater will flow.

Even with advancements in technology and science, we have not been able to come up with viable repellents that will keep crops safe as well as the environment surrounding it. Much like the rest of the country, Lancaster County farmers are looking for safe alternatives but have been unable to do so. If pesticides continue to cause problems for farmers and consumers, more resources and funding will be needed to find a more economic and environmentally beneficial substitute.