Homelessness is an issue experienced globally, and Lancaster County is no exception. Although the resources and positive outlook of local organizations makes the path to ending homelessness a clear one and puts Lancaster at the forefront of the nationwide movement.

According to the department of housing and urban development (HUD), 550,000 individuals experienced homelessness on a given night in 2016. A number of national organizations are in place to combat the issue, and even though homelessness has risen by about 1%, Lancaster county is outside of the trend. 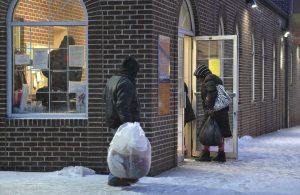 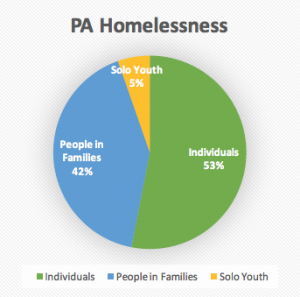 The Lancaster County Coalition to End Homelessness (LCCEH) is arguably the most active organization attempting to bring the homeless population of the county to zero. “The LCCEH is a network of health and human service providers, business leaders and private sector individuals working to eradicate the homelessness in Lancaster City and County through service coordination, advocacy, public education, and community organizing” They say that with Lancaster’s average monthly rent at $834, a person working minimum wage would have to work 107 hours to pay their rent.

The coalition has 108 rental units at their disposal to help families get shelter as quickly as possible to give them a solid platform to build themselves back up on. “our housing first approach empowers individuals and families by providing a safe, permanent home, along with the ongoing support they need to sustain it”

Lancaster County and the LCCEH have been recognized by the White House (2014) progress towards ending veteran homelessness, which is nearing completion as the homeless veterans in Lancaster in 2017 has been virtually zero.

The coalition has a proactive attitude towards homelessness and acts to prevent the issue before it reaches the people in Lancaster, and it seems to be working. According to homelessness reports done by HUD at the start of the year, Lancaster County has had the most success reducing its overall homeless population when compared to neighboring Berks, Dauphin, York,and Chester counties. 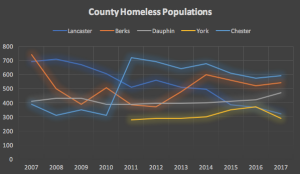 The “housing first” plan they’ve been using so effectively was first suggested in 2008 and updated three years later with the goal of completely eradicating homelessness in Lancaster by 2020. In 2008, county Commissioner Scott Martin outlined the economic benefits some skeptical residents might not have been aware of, “Currently, the cost to the community of dealing with homelessness can range from $15,000 to $60,000 per person per year…And there have been individuals that have cost $100,000 up to $125,000.” The 10-year housing first plan is estimated to cost a quarter of that per person and has clearly shown to have a higher success rate than other methods.

Jack Crowley: Ironically holding the same name as the demon-made-protagonist in Terry Pratchett and Neil Gaiman’s Best Selling Novel Good Omens, Jack Crowley is the President of Water Street Mission as of December, 2014. He is an avid church goer and holds a Bachelor’s degree in Government and Psychology from F&M College. In addition to running the most successful homeless shelter in Lancaster, he serves on the board of Community Basics, Inc. which develops local, affordable housing. On all fronts Crowley is helping get homelessness out of Lancaster county.

Nan Roman: Born in Bloomington, Indiana and graduating from the University of Illinois, Nan Roman is arguably one of the most internationally successful voices in the fight against homelessness. As the President and CEO of the National Alliance to End Homelessness, she and her organization work with all levels of government to get their messages out and educate the public. Not only the President of NAEH, she is also on the boards of other influential organizations like the National AIDS Housing Coalition and the National Housing Conference, and co-founded the International Alliance to End Homelessness.

An inevitable symptom of any degree of homelessness, Lancaster county has been less and less forgiving of panhandlers, voting to place limitations on the action. Local businesses have expressed outrage as they believe panhandlers and other members of the homeless population are scaring off business, and believe all of them are only asking for money to support a vice. An LNP went undercover as a panhandler in 2014 and had this to say about her experience, “…my experiment of begging made me feel demeaned and disgusted, and I started wondering if panhandling is maybe the start of a dismal whirlpool sucking people lower than they were before”

rises for first time since 2010. LNP. Retrieved from http://lancasteronline.com/news/national/america-s-homeless-population-rises-for-first-time-since/article_8cb0d606-daf9-11e7-95dd-d3a25167f567.html

Staff. (2017, December 12). Number of homeless declines in Lancaster County and

United States Interagency Council on Homelessness. (2016). [A map of the homeless