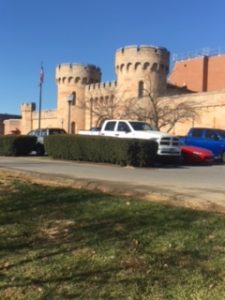 From gardens to education, it looks like the United States prison system is on it’s way to becoming green and helping the environment.

The United States prison system is the largest in the world. There are 2,220,300 inmates in federal and state prisons across the country. This means that there are all those people that could help make our country greener and environmentally friendly. 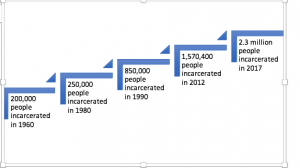 Timeline showing the increase of people incarcerated over the decades.

Correctional facilities are 24-hour energy intensive buildings that focus on security. They have little regard for efficient lighting, heating, and cooling. Making the prison system more sustainable allows for inmates to reintegrate into society in a productive and meaningful way. 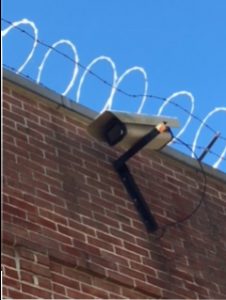 With the great increase of prison populations, it rises energy costs, and an increase in food and water use as well. There are two ways most correctional facilities are becoming more sustainable.

One area would be the physical structure of the correctional facility. They focus on engineering the built environment to reduce its intensive use of resources. A second area is programming for inmates. They provide green interventions for prisoners, that intend to increase their employability on release and therefore to reduce recidivism.

Many prisons have gardening for the inmates to participate in. By growing their own food, it gives them something to do and can save the prisons money that they would spend on getting food delivered to them. One prison reports that they have saved more than $260 thousand annually in food waste carting fees.

The Sustainability in Prisons Project (SPP) does everything from gardening to educating prisoners on how to be greener once they get out. Having gardens in prisons not only helps the environment, but it also helps the prisoners themselves relieve stress and gives them a purpose in the prison other than just serving their time.

“A garden was one of the few things in prison that one could control. To plant a seed, watch it grow, to tend it and then harvest it, offered a simple but enduring satisfaction. The sense of being the custodian of this small parch of earth offered a taste of freedom” –Nelson Mandela, “A Prisoner in the Garden.” 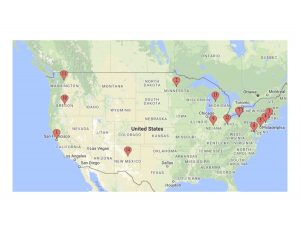 There are gardens inside of prisons all over the country and they only seem to be growing like the map (above) shows. Educating inmates on life skills like protecting the environment or how to be a good parent allows them to reenter society a much better person than when they left it. That is why programs like Roots to Re-Entry (R2R) works to teach inmates valuable hands on skills who might very well find green jobs upon release. They also hope to instill a spirit of hope, endurance, and patience. Virtues that are needed in both gardening and serving a sentence.

The Lancaster County prison holds roughly 890 inmates. All of these inmates could benefit from organizations like SPP or R2R. However, the warden of the prison Cheryl Steberger said that the prison does a terrible job of being sustainable and going green. They do have two gardens that the inmates work on, where gardeners will come in to help. However, they don’t have any education set up to teach them about going green.

Getting to Know Warden Steberger 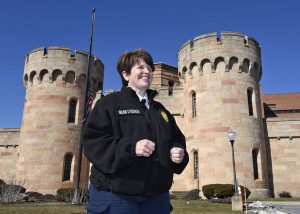 Cheryl Steberger is warden at the Lancaster County Prison. She got appointed to the position in February 2016 after 20 years of working at the prison. She was the prisons first female lieutenant, major, and now is its first female warden. She does believe that there could be more done to make Lancaster County greener. She says that they do recycle old newspapers, but there wasn’t a whole lot more that they do. She won with a 7-0 vote and says that her priorities as warden will include boosting staff morale, improving customer service, and increasing volunteer opportunities.

Seeing Your Parent Behind Bars 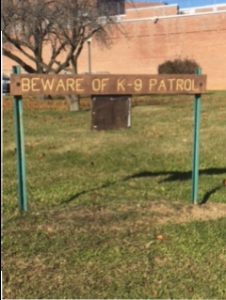 Two million seven hundred thousand children in the U.S. have a parent in prison. The criminal justice system has made it quite difficult for inmates to see their kids based on obstacles such as placing them in prisons far from home and making it a scary environment with guards and dogs at the gate. Lancaster County Prison has done a better job at making sure prisoners get to spend time with their kids. According to Toni Warfel, the inmate services supervisor, the prison has contact rooms where parents get to spend an hour playing with their children. The county prison also allows parents to list more than one girlfriend incase they have kids with more than one person.

Getting to Know Toni Warfel

Toni Warfel is the inmate services supervisor at Lancaster County Prison. She oversees all the treatment centers and things like the kitchen and Chaplin. She also works with the prisoners one-on-one to help with education programs. Warfel grew up in Lancaster County so she’s very familiar with the area and worked as a reentry council prior to getting her current position. She went to school for criminal justice and thought she might want to be a cop. After she started an independent study program with the local county jail near her school she became involved with the research of reentry.

Girl Scout troops are beginning to make a difference in prisons across the United States. They work with the young women in the juvenile detention prison. Some have even earned the Gold Award which requires them to complete 50 hours organizing community service programs. They earn badges just like any other troop. One of those badges include the gardening badge they get from planting and growing vegetables. Some of the troops survive financially by even selling cookies. It gives a sense of normalcy in these young kids lives that will hopefully keep them from straying off the straight and narrow path.