The Lancaster County Solid Waste Management Authority (LCSWMA), partnered with Covanta Energy, gives back to the community through its operation of the Waste-to-Energy Facility.  Located in Bainbridge, the facility receives truckloads of trash daily.  The trash is then given a new purpose, instead of being discarded and losing its value.  With their slogan of “Rethink. Recover. Renew.”, the LCSWMA have made it their mission to produce energy through the burning of garbage from all over Lancaster County. 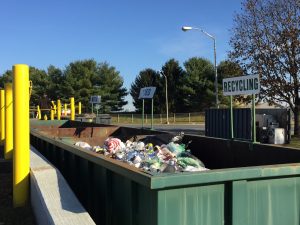 Public recycling bins outside the facility

The burning facility, opened in 1991, is considered one of the industry’s most efficient energy producers.  With the word “rethink”, the LCSWMA aim to convince citizens to reconsider what purposes garbage might have after its initial purpose.  With open minds, people can see trash as a resource rather than refuse.  With the term “recover”, resources can be gathered from the proper disposal of the trash, so it can be reused in an eco-friendly way.  Recovering materials rather than letting them fester in a landfill is positive for the economy, the community, and the planet.  Through this process, we can “renew” the value in the solid matter saved and reused in this garbage.  By using garbage to create energy sustainably, the LCSWMA is cutting down drastically on garbage used in a landfill and wasteful energy production methods.   Using this sustainable waste disposal program, as well as sustainably producing energy and electricity, energy can be created cleanly and efficiently. 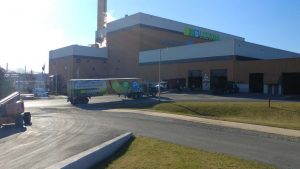 The exterior of the Waste-to-Energy Facility

With a different perspective and insight, trash is a valuable asset than can be used for compost, recycling, and energy production.  After the electricity is produced through burning in the incinerator at the Waste-to-Energy Facility, that electricity is sold back to the electric companies.  While the Waste-to-Energy Facility is owned by the LCSWMA, it is operated by Covanta Energy.  Along with many other Waste-to-Energy facilities, including one in Harrisburg, Covanta is dedicated to putting natural resources to good use and helping to generate energy.  As Covanta themselves put it: “We ensure no waste is ever wasted.” 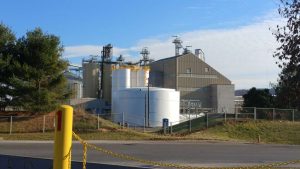 Further storage for the facility

The LCSWMA estimates that the average American throws away one ton of garbage every year.  By rerouting 96% of that garbage from landfills and into the incinerator, the Waste-to-Energy Facility is able to power 1 in 5 homes.  In a given year, 950,000 tons of solid waste is sent through LCSWMA’s integrated system.  That integrated system has four steps.  Step one is minimizing the volume and toxicity of waste.  What that means is safe curbside garbage pickup and recycling, as well as drop-off recycling at their facilities.  Step two is consolidate and transfer the waste.  Trucks deliver the trash to the Transfer Station Complex, where the garbage is separated and loaded into different trucks.  Step three is to combust the waste.  This is the burning of the garbage, minimizing the volume by 90%. While also creating electricity.  Step four is minimal landfilling.  The few materials that cannot be reused in some way are sent to the LCSWMA’s environmentally sound landfill.  This process ensures that everything that can be reused is. 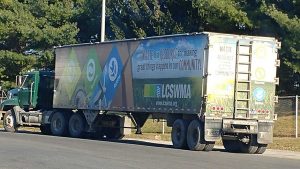 One of many trucks constantly entering the building

For residents looking to dispose of household hazardous waste, the LCSWMA provides a safe way to do that.  At the Transfer Station Complex, residents can bring anything that can be dangerous to dispose of in the regular garbage.  These include antifreeze, pesticides, paint, and   e-waste, such as computers and televisions.  Do not dispose of these materials in your normal garbage, as it is dangerous to garbage handlers and the environment.  In 2016, over 71,000 people brought household hazardous waste materials to be properly disposed of.  We must continue this trend to safely dispose of harmful materials.

When preparing recyclable materials for recycling, here are some helpful guidelines.  Make sure to completely empty glass bottles and wash them out.  You do not need to remove the labels from this glass.  Only glass bottles should be disposed of in normal recycling bins.  When recycling plastic, only place plastic bottles, jugs, and jar in the recycling bins.  Other plastic objects must be placed in the regular trash.  Don’t worry though, it will become energy for the community.  Newspapers do not need special handling.  Place them directly into the recycling bins with other recyclable materials.  Never put plastic bags in the recycling bin.  They must be reused or returned to your grocer, as some stores offer a bag take-back program.

What happens after all the trash is burned in the incinerator at the LCSWMA’s Waste-to-Energy Facility?  While some items are removed before burning because select few things cannot be reused, the vast majority of items are burned to create electricity.  After the items are burned, ash is deposited below the incinerator.  That ash is then removed and taken to the LCSWMA’s environmentally sound landfill, known as the Frey Farm Landfill.  Along with the small number of items that cannot be reused, the ash is safely deposited in the landfill.  At the end of each day, the ash from the other facilities is dumped on top of the other trash in the landfill.