Radon is an unseen radioactive gas, that can build up in homes and cause adverse health effects 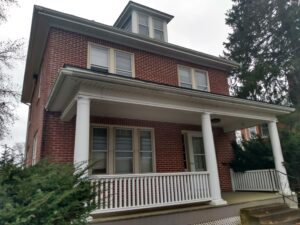 The typical American single family home could have a potential radioactive toxin, building up inside the home.

Smoking is the number one cause of lung cancer in the United States; however, the 2nd is much less known by the population. It is Radon, a byproduct of radioactive decay in soil, which cause 21,000 deaths to lung cancer in 2003. It can build up in any building, but the home is the place where the most exposure can occur. Radon gas decays into particulate that traps in the lungs. As the gas breaks down lung damage occurs and the potential for lung cancer increases over a lifetime. However, the risk of lung cancer when both exposed to radon and smoking for a considerable amount of time, severely elevates the risk of lung cancer. The lung cancer risks mentioned previously were done on miners, so the magnitude of health risks for radon is uncertain. Radon is very common, with most counties in Pennsylvania having above the EPA advisement level for testing,  picocuries per liter(pCi/l), and 40% of Pennsylvania homes on average having above this level. Radon enters any home through cracks, and then can build up in the enclosed spaces its trapped in. 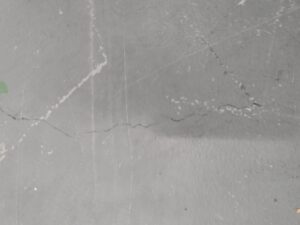 An Example of a crack in the floor that radon could enter the home through. These cracks can be as small as microscopic to allow radon to enter

In some rare cases, it can enter through well water, or the materials used for building. The buildup could be unknown for a long time, as radon is a tasteless, odorless, and colorless gas. If there is evidence of radon in the area testing should occur on any home below the 3rd floor. Testing can take a short amount of time and involves placing a small device for 2 to 90 days in the home and can get a general assessment of radon level in the home and should be followed by a second test to figure out if the home needs to be repaired. All windows and doors must be closed before the test, and the kit should be placed in the lowest lived-in floor, up off the group and away from disturbances. Another option is a long-term test, where a device monitors levels for more than 90 days. This helps set the year-long average, as radon level change as the weather changes. If the radon levels are high enough repairs to homes should be considered. The right repair method for the home varies widely as does the cost, with some fixes as simple as sealing cracks in the floor. As mentioned earlier radon can also contaminate a well water supply. This water is safe to ingest, as the risk of stomach cancer from radon, is very low, but can still pose a risk when if the contaminated water exposed to the air, like when showering. Then the radon can enter the body through the respiratory system.  If the well is tested and found contaminated, the remediation process involves either filtering out radon at the tap, or before the water enters the house.

In the late 1990s the Environmental Protection Agency, generated maps of states, broken down by county, to show the percentage of homes above the 4 pCi/l threshold that is considered problematic. The zip code for Millersville University and the surrounding area, 17551, showed that 60-70% of homes were above that threshold. The Pennsylvania Department of Environmental Protection backs up this graph, with test data showing an average of 8.1 pCi/l in basements, across over 1500 basements tested, with basements being upwards of 117.4 pCi/l, which is almost 30 times the EPA recommendation for home repair. Nearly 200 homes on the first floor were tested, with an average of 4.3 pCi/l, much closer to the EPA standard. Much of Lancaster County has similar levels for Radon, as well as similar percentage of homes above the EPA standard. 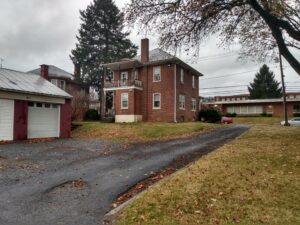 Radon can build up in any of the buildings pictured, however it is most dangerous in the home, for the simple reason that the most time is usually spent there, increasing exposure time. 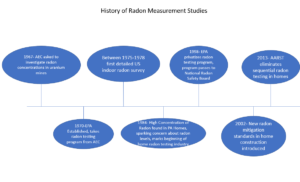 This chart shows the history of Radon Measurement Studies, from the first tests in mines, and notes post-testing privatization changes

The EPA has put out an action plan to combat radon related lung cancer. The Environmental Protection Agency is a governmental agency tasked with the protection of the environment. This plan builds off 2 plans put out before it in 2010, and 2015. The plan hopes to protect 8 million structures by 2025 but would also like to increase public awareness about the potential dangers of radon. The EPA says every dollar used to prevent radon can offset 11-20 dollars in health care costs. The EPA in their 2015 action plan established the National Radon Action Plan, which is to set a course for the EPA and private sector businesses to follow to prevent radon health problems.

In 1988 The State Indoor Radon Grants program was created by the Environmental Protection Agency. These grants were created when more knowledge of the dangers of radon that lead to concern in the public about the dangers of the gas.  The grants of up to $10,000,000 were created by the Indoor Radon Abatement Act which was passed through congress in 1988. The grants are sent to the 10 EPA regional offices for awarding to various states. Pennsylvania resides in EPA region 3. The grants are meant to help draft laws to correct radon problems, and to increase the outreach of public awareness about radon.

The Department of Environmental Protection

The Department of Environmental Protection is a part of the Pennsylvania government, and is tasked to protect Pennsylvania’s air, water, and land from environmental hazards. DEP is headquartered in Harrisburg, PA. The department has split the state up into 6 regions, with 19 offices across the state. The current Secretary of the Department is Ramez Ziadeh. The Radon Division of the Department tries to inform the public about the dangers of radon and the potential detrimental effects of excessive exposure to radon. The division also provides information to the public about radon, about the dangers of radon in both homes and other structures.

The American Association of Radon Scientists and Technologist

The American Association of Radon Scientists and Technologist is a private non-profit group dedicated to passing legislation relating to the radon science and technology field. The group is made of members who work with and study radon. The nationwide group is led by a board of directors, made up of 17 members. AARST would like changes made to legislation and public policies and advocate for building codes to be changed to reduce radon build-up. They work to advance legislation working to stop radon throughout government. They not only push for legislation on a federal level, but also on a state level, with Pennsylvania’s AARST chapter based out of Pittsburgh PA.