For over 17 years Lancaster City has undergone many renovations to help create a greener and more eco friendly environment around the city.

I recently had the chance to research and get a first hand look on how these specific green boxes located around the city help benefit the cities environment.

There are 6 green boxes located around Lancaster city and each one serves a specific purpose.

Street and Alleys that have been turned green 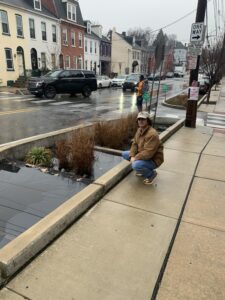 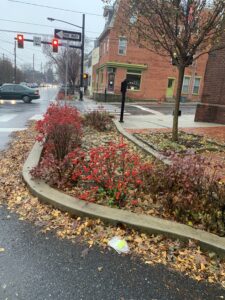 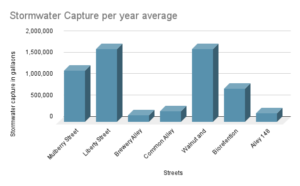 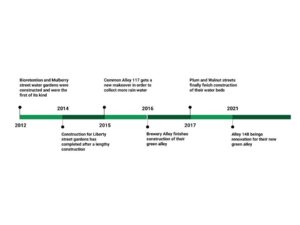 To go along with the Bioretention gardens and water beds. Lancaster CIty has instituted new “Green Sidewalks”. Just like the bioretention gardens these sidewalks were created to improve street quality and help stormwater flow. Some green infrastructure of these new sidewalks include, curb extensions, sidewalk planters, tree trenches and porous pavements. Most people had their sidewalk renovated to help with the incorporation of ADA requirements. A number of these small curbside rain gardens have been popping up all over the city. These curbside gardens serve to both help capture more rainwater and help improve traffic patterns by slowing down traffic and making it safer for pedestrians to walk.

The Leaders of the Projects

Fritz Schroeder is Director of Urban Greening with the Lancaster County Conservancy. He has been working with the county for over 15 years. Schroeder is responsible for implementing both the residential and institutional aspects of the urban greening initiative in Lancaster City. A native of Lancaster county himself, he has been involved with the green project for over 10 years. Schroeder explains that his Green missions are to build strong and healthy communities through the environmental process. He grabs people from all three sectors (nonprofit, for-profit, and government) to help make these green projects a reality and hope for new environmental initiatives.

Phil Wegner is another leader in these green projects as he is the President of Lancaster Conservancy. Lancaster Conservancy is an accredited nonprofit land trust that protects and restores natural lands for future generations. Wegner the leader of this group leads his team members to help grow the green projects to multitudes so people will support them. He states that Lancaster County is one of those special and unique places where we still have farmland and we still have wild places. The Conservancy works directly with the city of Lancaster to help provide these projects with funding and resources to help make Lancaster City green.

“Streets and Alleys Green Project .” Save It!, http://www.saveitlancaster.com/local-projects/steets-alleys/.

“Save It Lancaster .” Save It!, http://www.saveitlancaster.com/.