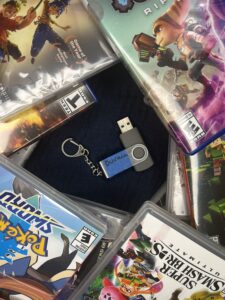 New video games come in all sorts of genres, but they all have one thing in common. They all come in a new plastic case. Could that case be harmful to the environment and, if so, should gamers stick to digital gaming instead?

The holiday season is upon us, and with that comes an important staple in today’s society: gift giving. One of the biggest industries out there that truly shines during the holidays is the video game industry. Every year, major companies announce new games throughout the year, but the end of the year is the most well known time of selling. Many different stores sell video games, but some specialize in the industry.

GameStop, a Local Place to Buy 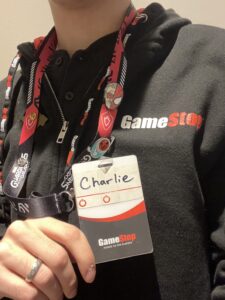 {GameStop is a retail store that can be found in strip malls and stand alone shops all across the United States. They have been around since 1984, when it was founded in Grapevine, Texas. GameStop is known for its variety of video games, but they are not only known for that. They are also known for their collection of memorabilia from movies, television, and pop culture! GameStop has a lot to offer shoppers, especially this holiday season. Stores are subject to extended hours for this holiday season, in light of incoming shopper traffic. That means more and more video games will fly off the shelves. }

This particular company has been faced with a problem that affects more than just itself. A debate that has gone around the gaming community for several years now is whether to buy games physically or digitally. Digital games are a more recent development in the game community, give or take a decade or so. Sure, computer games have been around for some time, but those games are typically on discs still. It has only been recently that games have come as digital downloads.

How Does This Affect You?

A major reason that this is prevalent to the local area is that stores such as GameStop primarily sell physical copies of video games, rather than selling digital ones. Most of this specific company’s revenue comes from selling physical games. While they still support the idea of selling digital games through a simple code, GameStop still backs the idea of selling a disk in a case. Local store manager, Kyle Imhoff, was asked about his preferences on this. His side can be read in the first sidebar story.

Another reason this can impact the local area is that these video game cases are recyclable. According to an article written on woollygreen.com, DVD and Blu-ray cases “…are made of polypropylene (PP5), which is 100% recyclable” (Evans, woollygreen.com). The only downside to this fact is most curbside trash collection will not accept these cases. 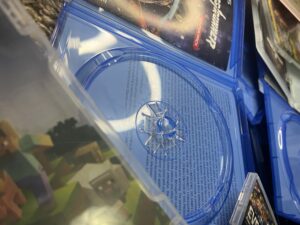 In order to properly dispose of these products, a visit to a local recycling center is most likely required. {Lancaster has its own Recycling drop off center where these video game cases can be taken. They take the special plastic these cases are made of, and other items as well. From newspapers to magazines, and even old appliances. They are up to the task of keeping our streets clean and keeping Lancaster green. They are located just outside of Lancaster city, on New Holland Avenue. They have a list and online brochure on their website outlining the instructions and other items that can be dropped off at their location on their website. Visit the city of Lancaster’s website (www.cityoflancasterpa.gov/recycling-center ) to learn more! 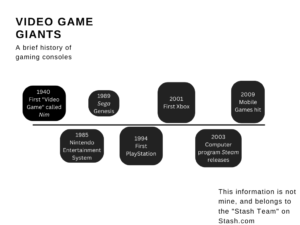 From digital back to digital, video game consoles have made their mark. Graph by: Charlie Duvall

Video game companies are not going to stop selling physical disks any time soon. Promotion and selling of digital copies of games will not let up either. Digital games are still a relatively new thing, so naturally not everyone will be on board with it. At least now, with the help of knowing that these cases are recyclable, gamers can play their games eco-friendly no matter which way they choose to buy their games. So to this, I say “Game On!” 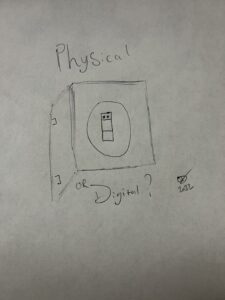 Kyle Imhoff, a local GameStop store manager, was interviewed recently about his workplace. He has been working for the company for over 15 years, and loves what he does. When asked about where he thought the company would be in a few years, he said “…hopefully right here where we should be…the gaming community feels strong when people are walking in and out of here (store location)…” When asked about what his favorite part of his job was, he replied “…seeing parents share their passion with their children. I love seeing a mom or dad say ‘Oh look! I remember playing a game like this when I was your age.’ That is one of the coolest things to see here…” Thanks again to Kyle at the Park City GameStop for taking time to do this interview.

Video game companies seem to always have something in development these days. From action packed shooters, to puzzle games, to games that put you in a calming mood, there is always a game to look forward to. This holiday season, there are plenty of new games coming out just in time for the end of the year. “Calisto Protocol,” “Marvel Midnight Sons,” and “Dragon Quest Treasures” are just a few things coming out in the near future! Be sure to check out your local game stores or online to get your games now, and keep an eye out for the new year releases coming in January and beyond!