Lancaster city has installed permeable macadam basketball courts at Brandon Park and Sixth Ward Park. The two basketball courts now capture and retain rainwater underneath the courts instead of becoming runoff. This both prevents puddles from forming on the courts and reduces the possible future risk of erosion underneath the risk. While preventing puddles from forming on the court, it allows players to continue dribbling and shooting through the rain or after a storm. With the future risk of erosion being significantly lowered, while not fully removed, it prevents Lancaster city from having to fix holes in the macadam or replace the basketball courts entirely after a few seasons or some very bad storms. The porous, or pervious, pavement allows water to flow through small spaces in the pavement, then down through the rock-filled bed beneath the basketball court, and then recharge into the groundwater aquifer. 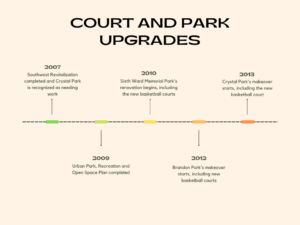 Permeable pavement is commonly used in parking lots, sidewalks, and driveways, but it’s become more common to use them for recreational areas, like basketball courts. Typically, permeable pavers, which are put underneath the macadam, are made from fired clay bricks or concrete with crushed aggregate to fill the joints between the pavers. 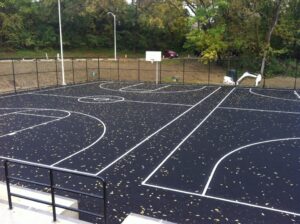 Brandon Park’s basketball court. (Photo provided by Save It! Lancaster)

Brandon Park controls the runoff from the upland streets near the courts with vegetated curb extensions and pervious pavement that allows water to percolate through. It also uses bioretention gardens to control runoff. Bioretention gardens, or rain gardens, use soil and plants to treat stormwater before it filters into groundwater. Lancaster city’s website page on green infrastructure projects mentions that Brandon Park is currently managing about four million gallons of rain water annually. Brandon Park has two full size basketball courts and captures nearly four million gallons of stormwater every year. 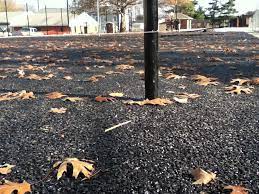 Sixth Ward Memorial Park’s basketball court was also constructed with permeable macadam and an infiltration bed that helps the court capture and retain whatever amount of water falls on it yearly. The basketball court has a pervious play surface with a stone infiltration bed underneath to manage the water from nearby Ross and Reservoir streets. The green infrastructure website page mentions that the Sixth Ward Memorial Park manages well around seven-hundred thousand gallons of stormwater annually. This park manages the many gallons of water instead of allowing it to flow into the city’s combined sewer system. Sixth Ward Memorial Park’s Green Infrastructure Plan was completed in 2011 and was heavily supported by the Pennsylvania Department of Conservation and Natural Resources. 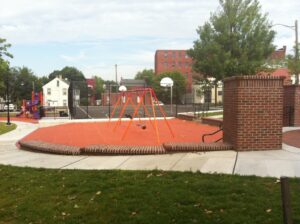 Crystal Park’s basketball court can be seen in the back. (Photo provided by Save It! Lancaster)

Crystal Park has also been allotted a new permeable basketball court to help reach Lancaster city’s twenty-five year plan. Crystal Park’s pervious pavement on the basketball court is designed to manage upland runoff from a large parking lot. The runoff from the large parking lot is directed into the infiltration bed directly beneath the basketball court. The new picnic area is also constructed of a permeable material to collect runoff from upland runoff from the hill side. Following in Brandon Park’s footsteps, Crystal Park now has bio-retention and/or rain gardens to capture road run-off along First Street. The combined efforts of the green infrastructure projects will help capture and manage an estimated seven-hundred fifty thousand gallons of water every year. 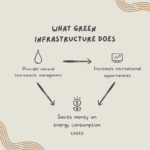 Informational graphic on the benefits of green infrastructure.

While also being useful in filtering stormwater before it becomes groundwater and preventing runoff, the permeable basketball courts are useful in reducing noise pollution. The newly paved courts are quieter than the old courts. The city’s green infrastructure website page mentions that locals have said that they are much happier with how quiet the courts are. The bouncing balls have more muted noise and don’t create as much of a ruckus as they previously did.

While Crystal, Sixth Ward, and Brandon Parks were being renovated, Rodney Park was also getting some major improvements. Rodney Park was improved upon by having a new kids pool and interactive water spray area added alongside green infrastructure improvements. Rodney Park had bioretention rain gardens installed to capture runoff along Rodney Street. The park was not just renovated for sustainability, but for the beautification and functionality of the park, as well as including public art. The renovation at Rodney Park helps move Lancaster city towards its twenty-five year sustainability goal while making it more family friendly. The park captures approximately 600,000 gallons of stormwater a year.

Charlotte Katzenmoyer was the Director of Public Works for the City of Lancaster from May of 2001 to November of 2018. She was the acting Director of Public Works from May 1999 until her official recognition as Director in 2001. She was one of the driving forces behind Lancaster City’s Save It! Green Infrastructure Plan. Katzenmoyer worked alongside Mayor Rick Gray to help make the Green Infrastructure Plan a reality. Charlotte Katzenmoyer was responsible for nearly 200 employees in the Bureau of Engineering, Operations Bureau which included, but was not limited to, the Bureau of Wastewater, Bureau of Water, Streets, Traffic and Parks, and other areas. Charlotte is now the CEO of Capital Region Water.

Parks | Save It! (n.d.). http://www.saveitlancaster.com/local-projects/parks/

Pervious Pavement with Infiltration. (n.d.). Save It! Lancaster. http://www.saveitlancaster.com/wp-content/uploads/2011/10/Pervious-Pavement.pdf