Lancaster County ranked as one of the most polluted air qualities in the United States! In two of three measurements, the air quality in Lancaster County has worsened from what it was a year ago, and this has caused about half the county’s population of 539,000 to now be put at risk for major health concerns such as premature deaths, and can cause a variety of different lung and heart diseases to develop or worsen. When dealing with the problems that are faced by the people currently inhabited by some 220,000 county residents that are made up of children under 18 and adults over 65, whose lungs are the most susceptible to breathing smog and soot, according to the Washington, D.C.-based nonprofit health and advocacy group.

How Bad is this Really Getting?

When it comes to using emissions readings collected by the U.S. Environmental Protection Agency from 2014-2016, the group said air quality in Lancaster County worsened from last year’s report for both ozone (smog) and annual levels of fine particulate matter (soot). Though the numbers are still extremely bad throughout the county daily levels of soot improved significantly from the previous report, but the frequency of unhealthy days still earned Lancaster County an “F” grade and a mere bump in the worst rankings from 12th to 13th nationwide. Lancaster County is ranked — tied with Pittsburgh — as eighth-worst in the nation for annual soot levels among the country’s 227 metropolitan areas. For smog, the county ranks 62nd worst. Lancaster County failed national standards for annual soot levels after having passed them for last three years.

When speaking for the American Lung Association “That’s something that should get everyone’s attention,” said Kevin Stewart, director of environmental health for the mid-Atlantic region of the American Lung Association. If looking at the previous reports weren’t enough to be an alarming wake- up call for the thousands that call Lancaster County home, the fact that now after three years of passing the ambient air quality for long term fine particulate particles, we’ve significantly failed that; that should be a wake-up call. What seems to be causing the increase of air pollution is both a combination of at-home pollution and being in an unfortunate geographical location downwind of pollution generated by power plants to the west and such large cities as Pittsburgh, Baltimore, Harrisburg and Washington, D.C., observes Stewart, a Manor Township resident.

The American Lung Association arrived at its rankings by using U.S. Environmental Protection Agency recordings of smog, as well as daily and annual levels of soot, as measured by two monitoring devices.One of the soot level monitors is located at Lincoln Middle School in Lancaster city and the other is among farmland off Route 340 on Newport Road in Leacock Township. Now, Lancaster wasn’t the only metropolitan area in Pennsylvania to fare poorly in air quality, Three other counties made the top 25 for worst annual soot levels in the U.S. Compared, when comparing Lancaster County’s 12th-worst ranking, there is also Allegheny County tied for 12th worst, both Philadelphia had the 20th worst and Lebanon County had the 24th worst right behind Lancaster County on the rankings. This current issue may become an even greater risk to the residents of Lancaster County if not paid more attention to in the future. There is definitely a way to help this current issue is definitely to try and be as clean as possible to help this current failing grade start to becoming satisfactory once again. Though this is definitely a long road there are always ways to become a cleaner and most livable air quality that everyone can enjoy living in for a long time. 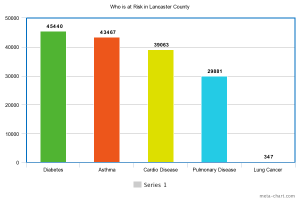 Kevin Stewart who is the director of environmental health for the Mid-Atlantic region of the American Lung Association he is the director that gave Lancaster County it’s first failing grade on air pollution levels in the last 3 years. Kevin Stewart has been grading the Mid-Atlantic since 1987, his major responsibilities have included informing the public and policymakers about indoor and outdoor air pollution, its health effects, its sources, and its means of control. He addresses pollutants ranging from tobacco smoke and mold emissions to outdoor ozone and particle pollution.  Stewart is responsible for managing a grant from the U. S. Environmental Protection Agency which provides multiple different services to school districts promoting the establishment of indoor air quality management programs, and he is in the early stages of work under a grant from the Heinz Foundations aimed at reducing wood smoke in Allegheny County communities. He also spend hours of his time on groups convened by state government that have explored, among other things, asthma strategic planning, public policy development on mold, and environmental public health tracking.

Since 1892, The American Lung Association of Pennsylvania has been trying to keeps peoples lung cleaner and healthier by helping children stay away from any hobbies or things that include smoking and being naturally clean in everyday life. This organization has been and is committed to grading and making sure that Pennsylvania is and stays committed to the safety of the current and future generations in making sure that both families and individuals around the Commonwealth of Pennsylvania are being clean and helping to ultimately lower the soot and pollution rates in Lancaster Country and other counties in Pennsylvania.