LCSWMA’s Waste-to-energy facility is turning local trash into power in more ways than one.

The Lancaster County Solid Waste Management Authority (or LCSWMA for short) has been operating in the Lancaster area since 1986. While it started as an organization with the city, the reach of the authority has expanded across the region into Lancaster and Dauphin counties. With over one million tons of waste to manage every year, LCSWMA looks to squeeze the value out of every last bit of trash.

LCSWMA and Covanta Profiles. A partnership with local sustainability in mind.

LCSWMA has a number of facilities that do their part to increase sustainability in the region. One of these facilities sits just a half hour west of Lancaster City. The Lancaster County Waste-to-Energy facility in Conoy Township opened its doors in 1991 and has been collecting most of the county’s solid waste ever since. The facility operates all day, every day thanks to the management partnership with Covanta Energy. Covanta and LCSWMA share the same goal of smartly managing waste and making the most out of it until there are no more uses for it. The presence of Covanta right here in Lancaster County should be a respectable one. Covanta has facilities all across the United States and Canada while also expanding into European countries such as Ireland, England, and Italy.

Isn’t it bad to burn trash?

While burning trash itself is a very dangerous and potentially harmful practice, the Lancaster waste-to-energy facility has taken numerous steps to ensure no harmful gasses infect the air. Six different components control and contain the air pollution so well that the emissions from the facility operate at 99% below air emission limits imposed by the Pennsylvania Department of Environmental Protection. 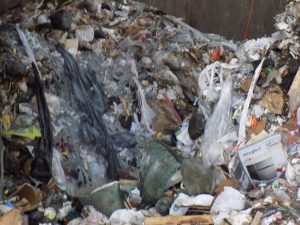 Trucks enter the facility by weighing their load with trash. They then dump the trash into the massive holding area. After dumping, the trucks are weighed again on their way out and get paid by the difference. Meanwhile, modified construction vehicles sweep up every last bit and push it into the trench. A crane comes down and picks up the trash and moves it behind a wall where it falls into the burning area. 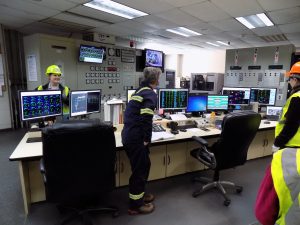 Now that the trash is burning, the priority shifts to making sure it is all done safely. In this control center, Covanta specialists monitor the boilers and the fumes coming out of them. While there shouldn’t be any hazardous materials in household trash, there are still objects we throw out every day that can cause a lot of harm to the environment once burned. Covanta ensures they take all the steps necessary to prevent any harmful gasses from exiting the facility. 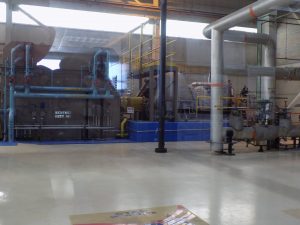 When the trash is burning, it is also heating and boiling the water surrounding the boilers which converts water into steam. This steam enters a turbine (Tan Machine on the raised blue platform on the right) which spins at rapid speeds. The turbine is attached to a generator (Brown machine on left) that converts the turbine’s spinning into power. 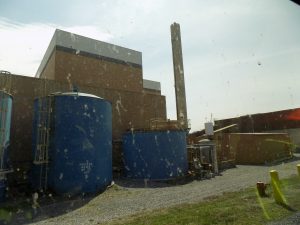 The LCSWMA Waste-To-Energy facility has only one smokestack, but not all that much comes out of it. The facility takes numerous measures to limit gas emissions including, semi-dry flue gas scrubbers injecting lime, fabric filter baghouses, furnace dry-lime injection system, nitrogen oxide control system, mercury control system, and continuous emissions monitoring system that is watched year-round just like the rest of the facility. 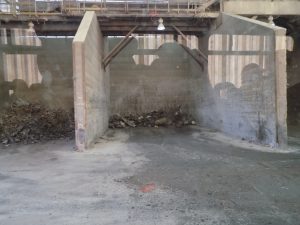 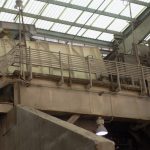 No matter what it is you burn, it is expected that there will be some remnants of the object. This is also true for LCSWMA. The ash left in the boilers is put on a conveyor belt where they divide what’s left into three different categories. Ferrous metals, non-ferrous metals, and ash. Magnets like these pick the metals out right from the ash. The metals are sent for recycling, while the ash gets cooled and sent to a nearby landfill as daily cover. 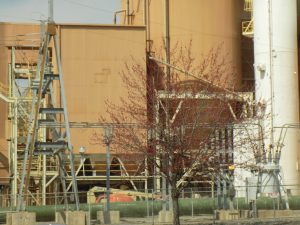 Now that every last bit of trash has found a new use, the power from that trash is sent out to the grid through this setup. The facility generates enough energy to power itself with 6 megawatts and give 30 megawatts back to the local power grid.

Another perk of the waste-to-energy facility is that it is a zero-discharge establishment when it comes to water. 600,000 gallons of water are used every day from the Elizabethtown wastewater treatment plant so that no river water is used at all. The water that is used for emissions control and ash cooling is treated and reused on the site, so no unnecessary water is wasted.

A history of efficiency.

The 28-year-old facility has no problem flexing its muscle. Last year, the waste-to-energy facility celebrated the processing of 10 million tons of waste. That amount of processed waste made 5.6 million megawatt-hours of power, enough to provide all homes in the city of Lancaster for 21 years. What didn’t burn still provided valuable resources. Over 180,000 tons of ferrous metals were recycled, enough to build two golden gate bridges. On top of all this, the facility has also offset the greenhouse gas emissions of 1.9 million cars on the road for a year.
Joey Neuhoff is the general manager of Covanta’s mid-Atlantic region and he has nothing but praise for the facility. “Almost 30 years ago LCSWMA made the smart decision to invest in an integrated waste management system that also provides clean, renewable energy to its community. The milestone of processing 10 million tons shows that their investment is paying off and will continue to provide important beliefs to the community for many years to come.” 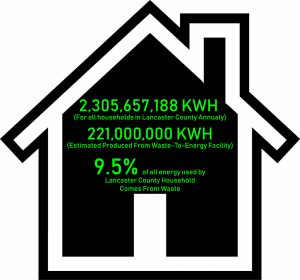